Can you make a male friend in Korea? Are Korean guys attracted to Asian but non-Korean women? Do foreign women who are not Asian have it easier? That is what is troubling our next reader who is going to spend a year in South Korea. 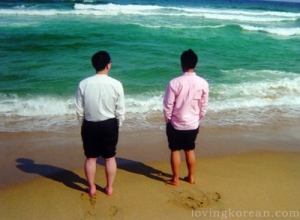 I’m going to study Hangul in South Korea for approximately 1 year. I’m an Asian girl who studied overseas for quite a while so I’m used to the North-American culture. Now, I’m really into Kpop, I wont lie about it. And that’s probably my main reason of planning to study Hangul in Korea as soon as I finish my education here.

But I noticed that all Korean women seems flawless. In terms of appearance, I feel that all of them are attractive (they just look… perfect and it’s killing me). So I’m kind of concerned that it will be hard for me to get a Korean male as a friend later because of that. It might seems ridiculous but I do know a few Korean male here and they don’t show any interest with other girls except Korean (I did notice that many girls are showing their interest with them but they don’t react to it).

So, I know that many non-Asian girls have this question of whether Asian male like non-Asian girls or not, but in my case: did Korean guys have interest with Asian (but not Korean) girls? — I actually feel that non-Asian girls have higher chance than me, as Asian girl but from different countries, to get Korean male as a friend or even boyfriend. — I know that basically it all comes to personality and racial background should not matter at all, BUT it will not be right to say that people don’t take this thing into consideration.

I know that my question might be your typical question and I’m sorry for asking such question. It’s just that I’m afraid that I’ll be all alone in Korea and the learning experience wont be as fun as what I’m experiencing here and I’m beating myself for it. Or the worst part is, i ended up getting more foreigner friends (non-Korean), my English stays the same (or even better), I still can’t speak Korean language at all and I’m wasting 1 year of education and money.

As for the real world, from what I’ve heard and seen, most Korean women take care of their looks. They follow fashion, work out, wear make-up… On the other hand, Kimchi Man mostly gets to see me wearing loose pajamas, and he still hasn’t run away screaming. People are different.

But why would looks concern you when it comes to gaining a friend? I really never heard of someone choosing their friends based on looks. Girlfriends, yes; friends, no.

There are many lonely and shy people in the world, and it is no different in Korea. When you meet people like that, if you show them kindness and genuine interest, you will make friends easily. If you only want to make friends with Kpop stars, you are right that you will probably be alone.

You seem to have set your expectations of what a satisfactory visit to Korea is very strictly. You are traveling far away, to a different country, where everything will be new, unknown and exotic. Why not keep an open mind and decide that even different experiences other than the ones you set down in your question might be educational, fun and worth it? Then you will have a good chance of looking back on this one year and deciding that not even a minute of it was wasted.

You are right that we got a couple of questions about being attractive to Korean men before and you can read our answers to them: “Would Korean man ever find someone of my descent attractive?“, “Will a Korean guy be attracted to me if I’m just an ordinary girl?” and a somewhat similarly themed: “Are Korean men only attracted to skinny girls?“.

However, every question is unique and we are glad you asked yours.

Just one note: I’m not sure if you are really going to study Hangul in Korea or not, but I noticed many times that people mix up Hangul and Korean language. It usually takes only a few days to learn Hangul as it is an alphabet with 24 letters.