Korean keyboard stickers are not just there to be cute but are actually very useful. If you you’re going to type Korean on a physical keyboard, i.e. you’re going to push the buttons instead of tap on a touch screen, you’re going to have to know which key corresponds to which Hangul character.

Most of us who don’t live in Korea get keyboards that don’t have Korean alphabet marked on them and the easiest way to rectify this is by getting Korean keyboard stickers.

These cute Korean stickers come in variety of shapes, sizes and applications (some of them not even cute, if you’re not into that).

The Korean square keyboard stickers which cover the key completely are my least favorite ones, as cute as their design may be. I don’t like the feeling of them under my fingers while I type, I don’t like that the glue starts leaking out from the sides after a while (especially on laptops where the keyboard is subject to heat from below), and I don’t like that they cover my original keyboard markings, which are quite useful for people like me who are not using the English keyboard to begin with and need to switch between three or four different input methods. (Did you know you can quickly do this with SHIFT + ALT on Windows?)

My favorite Hangul stickers are those that are simply cut-out in the shape of Hangul characters, and don’t have any drawings or embellishments around them. 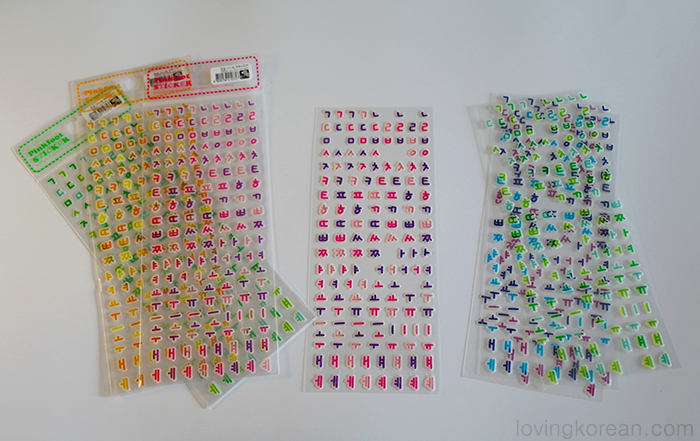 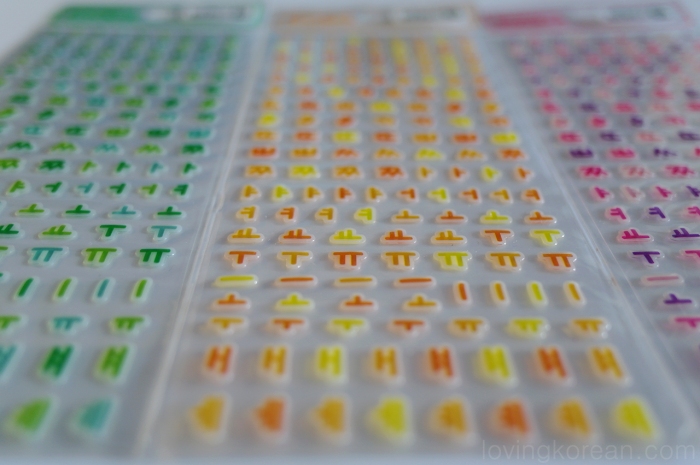 Out of those types of Korean stickers, there are two kinds:

Hangul diary stickers are cuter, and more colorful but they have their downsides too. Their surface is raised so you will be able to feel them under your fingers. They are also subject to keyboard’s heat, and their glue is not very strong, so they end up sliding around your keys after a few weeks. Which is good when you want to easily remove them but not so good if you are not up to replacing them often. Another problem is that if you have black keyboard, they are practically invisible as soon as you’re not in a brightly lit room. 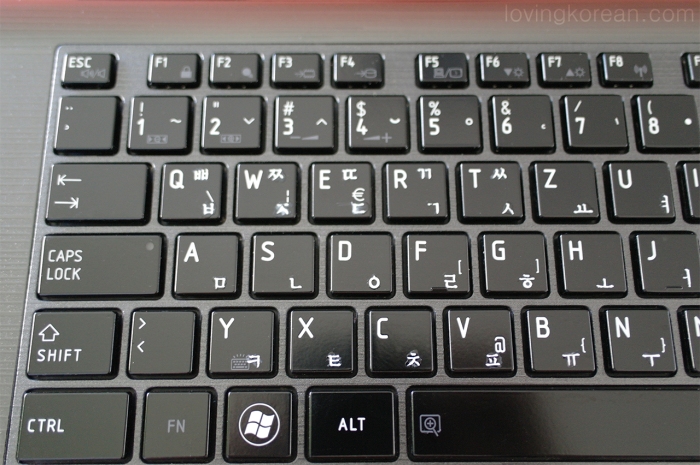 Hangul rub-on stickers are designed for keyboards. Right now these are my favorite type. They blend in with the keyboard seamlessly and no one would ever guess your keyboard did not come out of the factory with Hangul on it. You also can’t feel them at all. The downsides are that they erase really easily unless you fix them with something, and some people might feel reluctant to mess with nail polish around their computer.

Luckily for you, I made a tutorial

Update: It is now April 2015, and some of the Hangul stickers have worn off of my black keyboard. Since this article was written in February 2014, that means the rub-on-stickers covered in nail polish have survived more than a year of heavy use, which is considerably longer than any other Korean stickers I ever used. Surprisingly, nail polish left absolutely no trace on the keys, so I needn’t have worried it would damage them. I must note however, that my keyboard is made of plastic that is itself black, and not painted black, so there is no coat of paint that a few other keyboard keys are sometimes covered in. They might not behave so splendidly when dripped on with nail polish.

If all this seems too complicated, you can always just stick to handwriting beautiful Korean letters with traditional Korean brush calligraphy and forget about electronics.

All joking aside, these days most of us type more often than we write with a pen, and you will probably find yourself doing so too, no matter if you are communicating with your online Korean pen-pal, practicing Korean vocabulary, or maybe even sending romantic Korean messages to your boyfriend or girlfriend. And in the end whichever type of stickers you choose, they will be very useful to you as you begin to learn Korean and type Hangul on your keyboard.

Where to buy Korean keyboard stickers?

If you don’t live in South Korea you can buy Korean stickers like those in this article and many other on any of the Korean online sites that I listed in my review: