That K-pop is an unstoppable force is proved by the fact that I’m here, reviewing a book that covers it inside and out, despite (sort of) successfully navigating around it for the better part of last four years. Admittedly, being obsessed with Korea and remaining ignorant of K-pop is a pointless endeavor and one you will fail at for sure.

“K-POP Now!: The Korean Music Revolution” by Mark James Russell was given to me by Tuttle to review together with their Elementary Korean textbook.

What did I know about K-pop before I started reading “K-pop now”? And how much I knew about it by the time I finished? Is this book for people who think K-pop was born with PSY’s Gangnam Style? Or is it only geared towards hard-core fans? Read on to find out.

“K-pop now!” is filled with flashy photographs and uses stitch binding which makes the build of this book not unlike it’s subject – colorful, bright, and here to stay. The photographs are high quality printed on glossy paper, and a real pleasure to look at. A minor fault was that a few photographs were unnecessarily grainy and pixelated, for example one of the 2PM’s photographs, but the great majority are of excellent quality.

2PM picture is blurry and pixelated 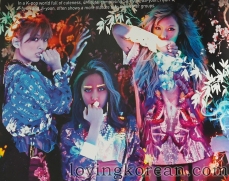 but all others are sharp and high quality

With its 128 pages, spanning 6 chapters, it covers everything from the origins of K-pop all the way to up-and-coming groups that may be the next big thing. There are short interviews with Kevin from Ze:A, Brian Joo from Fly to the Sky and even Eat Your Kimchi. Maybe most importantly, the book has sections for each of the most popular boy groups, girl groups and solo artists.

Or at least so it claims.

I’m going to be completely honest, I was less than enthusiastic that I had to read almost 130 pages about K-pop. I figured if you’re not a fan of one of these bands, what is there to look forward to?

But once I started reading I unexpectedly got immersed in it, and it turned out I had plenty of ahhh-that-is-why moments, as things I already knew suddenly started to fall into place, and so this book ended up not only teaching me new things about K-pop, but also showed me that I already knew much more than I thought.

That I have numerous snippets of knowledge about K-pop is not at all surprising when you consider that majority of you, my readers and followers, are K-pop fans. I need but to glance at your Twitters and Tumblrs to be showered with the newest stuff in the K-pop world.

I also realized that I have unknowingly watched a lot of K-pop stars in Korean movies such as “71: Into the Fire”, “Iris”, and even an American one, “Ninja Assassin” that featured not only one, but two Kpop stars!

It turns out K-pop is filled with stunning facts, for example that before 2009 about thirty K-pop groups debuted each year, but then suddenly that number grew to forty, seventy, and then up to a staggering amount of over a hundred in 2012. I also got to find out that K-pop didn’t spring out of nowhere, but as the author said, that Koreans have long been a very musical people. And the mystery why some K-pop songs sound like they’ve been cut and glued from several songs has been resolved for me as well.

The first chapters were my favorite, as they talk more about Korea and how it all came to be, but I appreciated how information of interest to K-pop fans was woven into it. For example, as the author talks about Seoul he mentions locations of entertainment companies, star’s restaurants, K-pop shops, and other places that might be of an interest to a K-pop fan that a regular tour guide would not mention.

There is also a section dedicated to what you need to expect and what kind of grueling training you will go through if you wanted to become a K-pop star yourself. 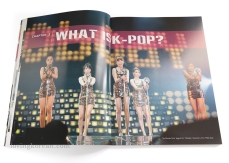 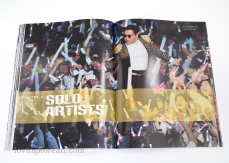 One thing that did always leave me in awe when it came to K-pop was how incredibly hardworking these performers are. The hours they put in, and the amount of sleep they get, put even the most diligent of us at shame.

The authors covers this in chapter 2, titled “What is K-pop” and while he does mention how difficult it is for the stars, I couldn’t help but feel that his source of information came only from the companies.

Which brings me to the biggest issue I have with this book. Far from a K-pop expert but not living under a rock either, I have heard of one of the most dramatic and famous events in K-pop history – the TVXQ! split. Which is why I found myself very puzzled when I reached the TVXQ! section.

Chapters 3 and 4 are structured around introducing 15 boy groups and 13 girl groups. They are listed alphabetically, save for the first three groups in each chapter which my guess is have been chosen for their popularity, and as such come first and have four pages dedicated to them, instead of the usual two that other groups get. For boy groups it is Big Bang, Super Junior and TVXQ!, and for girl groups it’s Girls’ Generation, 2ne1 and Wonder Girls.

So obviously the author gave TVXQ! plenty of attention. However, throughout the whole article he makes it sounds like TVXQ! always were a duo, even when talking about their previous achievements as a five member group. At first I didn’t find this too strange, because while it may not be perfectly accurate, the book is called K-pop now, not K-pop before. But the more I read, the more it bothered me.

First of all, every other band seemed to have their former members listed. I looked into it a bit more (i.e. I opened Wikipedia) and for example, Hyuna was part of Wonder Girls for only a half of a year and yet was mentioned as having been a member, while ex-TVXQ members who were there for 6 years, haven’t. 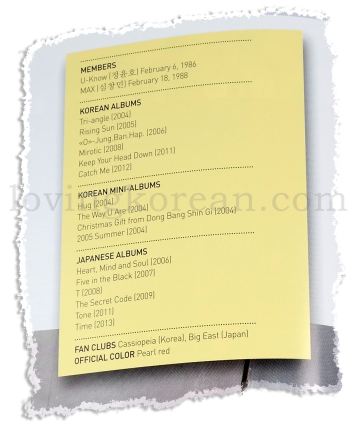 Former TVXQ! members are nowhere to be found

All other groups seem to have their former members listed

Second of all, in Kara’s section the author mentions that they were on verge of breaking up and their fans “were shocked and worried that this would turn into another TVXQ!…”, which for someone who was finding out about them just from this book would be confusing as according to the author TVXQ! have always been a happy duo.

The three former members, now in a band called JYJ, are mentioned twice at the beginning of the book, once as an example how Kpop bands have strange names, and once for holding concerts in Europe.

Now, if you’re not a TVXQ fan this may all seem irrelevant, but honestly, the real problem is that it made me question the authenticity of other things the book said, and made me unsure of the exactness of what I was reading since I don’t have the knowledge to verify it.

A pity, because other than that, I really do feel like thanks to this book I learned and got to understand a lot more not only about about Kpop but about Korea as well, and just as importantly, I had fun in the process.