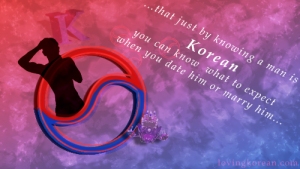 I was sitting yesterday at a family lunch, looking around, thinking how very different we are. Brothers and sisters and grandparents and cousins all sharing same genes, we have spent our whole lives in the same town, and yet we could hardly agree on any given topic that arose in the conversation. What kind of food we like? Who should run our country? Do we want to marry and have children or not? Is there a God? Should we have ordered more food?

And then I looked at my boyfriend, with his jet-black hair and Asian features, who couldn’t understand a word of what was being said. His inner conversation was probably being run in Korean language, of which I wouldn’t have understood a word. And I realized that at that moment, at that table, of all the people sitting there, he was the most similar to me.

Actually, he agrees with me on more subjects than anyone else I have ever met.

And because I experience Korean culture through him, and he thinks the same as I do, Korean culture seems familiar, nice and welcoming. If I have had the misfortune to meet a few Koreans I don’t like, Korean culture would seem strange, alien and… well, wrong.

Many times I read „I know not all Korean men are the same, but in general…“ or „I don’t mean to generalize but in most cases…“ Well guess what? It IS generalizing, even if you acknowledge there is a black sheep here and there.

So, if there is one thing I would like this blog to change, it would be people’s opinion that Koreans can in some way be described or defined. That just by knowing a man is Korean, you can know what to expect when you date him or marry him.

And if you already know your Korean man well, or actually any man from a different culture, I am calling on you to be the change, and let people know the differences between us are not amplified by distance.

I realize that in some way I am telling my readers that you don’t need this blog, but I would be lying if I claimed otherwise. The best way to find out what your Korean guy is like, is to go and spend time with him.

This post was inspired by comments on one of our previous posts and by Daily Prompt.

4 thoughts on “Be the Change”