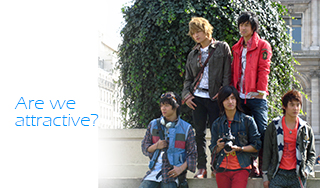 Is it true that Korean men do not think foreigners are attracted to them?

To have any idea what Korean men really think we need to conduct a research survey with large enough sample size. Now we’ll come down to earth and offer you what we can: our opinions.

Only experience with foreign women he had before he met me was while he was doing his Korean military service. He came across soldiers serving in American army and he says they were… less than interested in Korean men, to put it politely.

My experience with Kimchi Man also says yes to this question. He was (pleasantly I hope) surprised when I showed romantic interest in him. He took my advances in a stride, however, his opinion never having any impact on the development of our relationship. He explains that he simply assumed I am the kind of person who cares far more about man’s personality than his looks. While I’m going to use this chance to boastfully say that yes, I had been in a relationship not caring about the looks,this is not the case with Kimchi Man. He is exceptionally handsome and the fact he doesn’t seem to know it makes him all the more attractive.

Remembering clearly Kimchi Man’s friend joking about visiting France after he heard what a success K-pop concert was there, I asked if the rise of K-pop and the whole Hallyu wave might have changed Korean guys’ perception a bit. Kimchi Man’s answer: “The chances went from impossible to highly unlikely.” LOL.

Keep in mind though, that Kimchi Man is the most modest person I have ever met. Other Korean guys may be more confident.

Here is what one of our readers has to say about the subject:

The first time I met my Korean boyfriend (before we were dating) he actually stated he was surprised that I agreed to meet him and how most white woman weren’t attracted to Asian man. I disagree with the statement, but all of my family back home in Canada sadly fall more under that stereotype.

What was your experience? Do Korean guys think foreign women find them attractive?

40 thoughts on “[Q&A] Korean men do not think foreign women are attracted to them?”