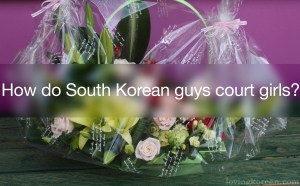 Hi, I met this South Korean guy 2 months ago in Seoul. We are from different countries. We have been keeping in touch, mostly initiated by me. I don’t dare to initiate many chatting sessions online for fear of being too straight forward in my likings for him. So far, he has mentioned that he missed me twice. My question is, how does South Korean guy actually go about liking/wooing a girl as I’ve read that Korean guys like to keep things hush. He always reply whenever I initiate the chattings, but I wonder if South Korean guys are apprehensive about taking initiative with other Asian girls? Do I continue waiting, taking initiative, ask him directly (will it scare him off), or just let it die down? I’ll be looking forward to any comments.

Don’t let it die down! You have nothing to lose and much to gain. :D

My suggestion is that you forget he is South Korean guy and just focus on him personally. I did the same mistake, I was trying to behave the way I thought a South Korean man might find appropriate and, boy, was I wrong.

Kimchi Man and I met online, and messaged and chatted every day. He seemed to have nice opinion about me, but other than that I had no idea how he felt about me. At the same time, I was getting more and more crazy about him. He became a close friend and keeping my true feelings seemed like lying. One day, I just couldn’t take it anymore and I told him I fell in love with him. I was as blunt and non-hush as it gets. It took him approximately an hour of further chatting to tell me he feels the same. That was the most difficult hour of my life, and I have been through some rough things. :)

However, even though he said he loves me too, over the next few weeks he seemed cold towards me. Polite, kind and nice, sure, but without any show of emotions. I began to doubt his feelings. I told him I can’t wait any longer and if our relationship is to continue, we need to meet face to face. It didn’t take him long and from the moment he decided to come to visit me, he has been the most loving, passionate boyfriend I could imagine. He completely changed his behavior. I guess falling for someone who lives far away can be a bit intimidating so it takes time to sort out plans and thoughts. If I understood correctly, you are not in Korea right now.

The reason I told you all this is because I wanted you to see that I was very much pushing him and definitely taking the initiative every time. And it worked wonderfully for me. He told me later he really enjoyed that I was so honest and not trying to play games and hide things from him. However, I believe this depends much more on the Korean guy’s personality (and also whether he had a girlfriend before or not) than his nationality or what courtship in Korea is like.

Since your guy seems to enjoy chatting with you and told you he misses you don’t hold back on initiating chat. You can’t know if he’s not contacting you because he doesn’t care too much or if he is showing you he cares so much that he puts your needs before his. (Kimchi Man would definitely think that letting me talk to him only when it’s convenient for me is very romantic.)

I suggest you chat with him as much as you want and see where things go from there. Showing how much you like talking to him might encourage him to make the first move, and if not, then you can at least get to know him better.

Since it has been only 2 months I would wait a bit longer before confessing to your Korean guy anything directly, but do let him know which of his traits you find appealing. Don’t be shy to give him a compliment. It is easier to show other person you like them when it feels like they like you too.

And I bit of Kimchi Man’s wisdom: When we talked about the day I told him I love him, I mentioned how scared I was of ruining our friendship. He said that everyone likes being liked, and there is no reason for stopping a friendship with someone who makes you feel good about yourself.

If you think there is still something we haven’t explained or wondering how can you know if _he_ likes _you_, feel free to ask in the comments. Have a nice day everyone!

57 thoughts on “[Q&A] How does South Korean guy court girls?”